Images and sounds create impactful emotions and illustrate what you read in the text. With Elm Story 0.7 you can now bring your storyworld to life using multimedia content, creating a dynamic interplay between words and. 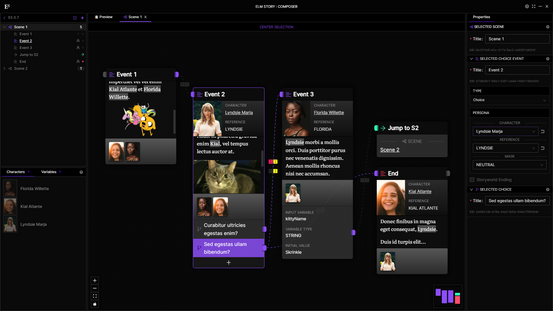 Creating new events is much easier now. Just drag out a path from a choice or an event passthrough.

You can now create and change the style of your content through a Notion/Medium-like floating toolbar.

No more silence when you enter your storyworld. Now, scene and event support a new audio profile. The profile defines the audio instance to the storyteller e.g. what is the track/asset identifier? Does this track loop?

Options include loop toggle. Configuration is managed via the element properties panel. 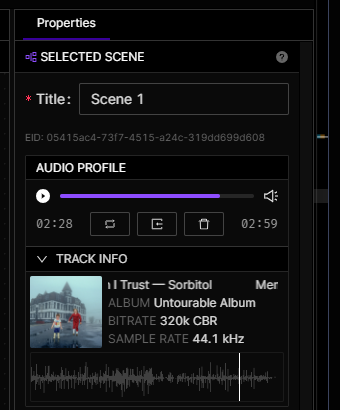 Images can be imported into an event. Currently the inline image element will fit horizontal and can be cropped and adjusted with or without the help of a togglable grid.

it is possible to make a reference to a character using the "Character Reference" command from the command menu "/". Once open, the character to be referenced can be selected, the style changed and whether the alias is to be shown can be selected using the right arrow.

Characters that are referenced within an event are displayed under the preview of the content in the scene map. You can click on the icon to open the Character Manager.

In addition, in the Events Tab you can check all events in which that character is referenced.

At the moment a referenced character is seen in the storyteller as normal content. Future versions may extend this to include audience interactions e.g. display information about the character on reference click, character-specific interactions, etc.

Based on designer feedback, v0.7 is packed with 10 major features, ~60 enhancements and ~70 bug fixes.
An exhaustive list of 0.7 (d6f6b568) changes are available on our issue tracker.

This is an early access release and there are bugs. Report problems to our issue tracker and join our public Discord server.

Thank you to our generous community members who are able to donate monetarily or volunteer their time. You power Elm Story's continued development and growing awareness!