After one year of design and development, 8 Alpha releases and over 400 bug fixes, enhancements and added features, I'm beyond excited to announce that Elm Story is ready for Early Access!

Elm Story is packed with features and nuance. Getting started can be a little overwhelming.

On Friday, November 5th, I will begin hosting weekly educational livestreams on Twitch. This will be a great way to ask questions and explore everything Elm Story has to offer.

During Alpha, you could only export your games as portable, JSON data.

Unless you were backing up or transporting your game data for use with 3rd party tools, Elm Story wasn't capable of making your games playable outside of the Editor's Game View.

Made possible with the new Elm Story Runtime Engine (ESRE), this release enables end-to-end, visual development and compilation of interactive stories. You can now export your games as installable, offline-ready apps (PWA) for play in a web browser.

Currently in development, Amber Shores is a game exported from Elm Story.

As of 0.5, ESRE supports an auto-bookmark feature that saves and loads the player's most recent game event, persisting game state between sessions. To improve on-going player experience, ESRE also remembers prior events to be progressively leveraged as Elm Story matures.

To export a game, click the Export button in the Game Outline titlebar.

Once the file explorer opens, select a folder and proceed. Elm Story will compile your game to a nested folder, ready for publication to your personal web server or 3rd party host. You may also decide to wrap your game in a native container ready for desktop and mobile app stores.

This information is used to personalize your game's Title Screen and Settings views.

ESRE comes with two themes: Console and Book. The player can change theme under Settings, persisted between sessions. 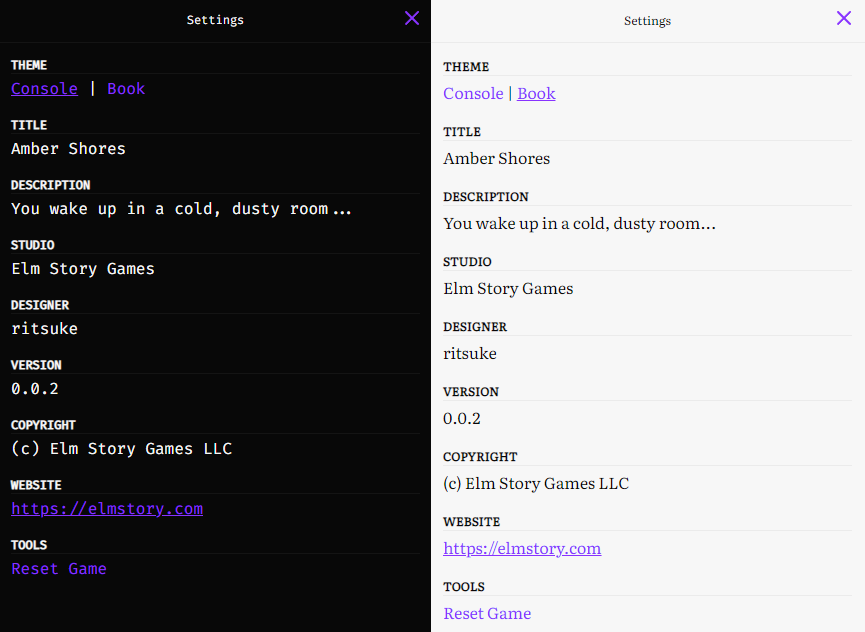 In a future release, Elm Story will support visual theme and icon customization in the Editor.

Currently, ESRE does not support game patches. Planned for early November, 0.5.1 will address this complex issue.

The Editor's Game View is completely redesigned to feature an embedded version of ESRE. Supporting hot reload, changes you make to your game are reflected in realtime.

Prior to 0.5, designers were required to add at least one choice to choice passages for the player to move forward. If you simply want the narrative to continue, this results in unnecessary work and maintenance. Additionally, if you did not connect a passage to a destination passage or jump, the old engine would automatically end the game once the player arrived.

Passthrough allows choice passages to be absent of choices. In this case, the designer can simply connect the passage directly to a destination passage or jump. Instead of choices, ESRE will present a 'Continue' button to the player.

In another case, a designer may require a player to descend a branch of passages to a leaf (any passage with no open routes) that simply needs to guide the player back to the origin of the branch. This could be solved by connecting the leaf passage (input or choice) to a destination jump.

ESRE removes this unnecessary step by returning the player to the origin branch, otherwise known as Loopback. When this scenario is encountered, ESRE will display a 'Return' button to the player.

In the contrived example that follows, Sub branch 1 end and Sub branch 2 passages will return the player to the Root branch.

Depending on current game state and open route availability, it is possible to override Loopback behavior by connecting leaf passages to destination jumps.

Passthrough and Loopback save a lot of time, but these solutions also prevent ESRE from knowing when a game should end. In 0.5, choice passages support a game end flag toggled in the Scene Properties > Selected Passage sub-panel. 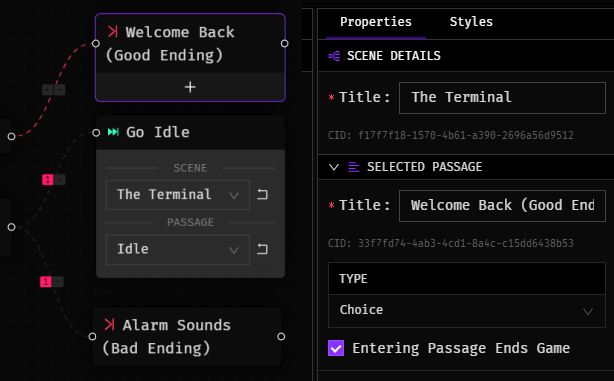 This is an early access release and there are bugs. Please report issues you encounter to our subreddit, r/ElmStoryGames.

Next year, I will focus on performance and productivity improvements, scoped variables, web and mobile versions of Elm Story and much, much more.

2022 will also see the launch of Elm Story Cloud (ESC), a service for providing configurable, no-code publication, hosting and community.