Greetings — 0.4.0 is now available. This release introduces two essential features and the end of the alpha stage for Elm Story. Stick around to the end for more information on Early Access coming late September/early October.

In addition to the default Choice type, Passages now support a new Input type. This enables players to enter custom data during gameplay that can be used to deliver more unique story experiences.

To use this new feature, add a Passage from the Game Outline or Scene View. Next, right-click the Passage header or use the Component Properties panel to toggle between Choice and Input types. Finally, connect the Input Passage to an available Variable.

The Game Renderer will display appropriate UI for each supported Variable type: boolean, number and string.

Designers often need to reuse Passage content. To achieve this in older versions of Elm Story, Passages would need to be duplicated and maintained, breaking the fundamental development principle: Don't repeat yourself.

Pressing tab inside an expression block will the move text cursor to the right and outside. In a future release, I'm planning to implement tab completion for Variable names (identifiers) to ensure this process limits interruption of writing flow as much as possible. Syntax highlighting is also planned. 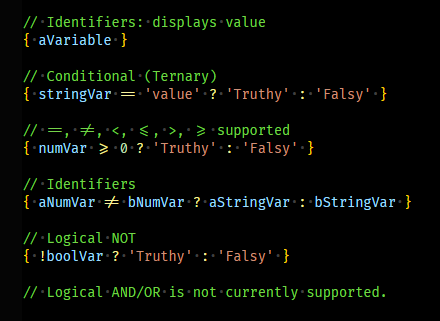 The Game Renderer has a new tool for highlighting expressions and errors.

This is an alpha release and there are bugs. Please report issues you encounter to our subreddit, r/ElmStoryGames.

In late September/early October, I will release Elm Story 0.5.0 into Early Access.

My focus is a compiler for processing Elm Story story data into a fully playable game for the browser. The compiler will utilize a rewritten Game Renderer (with improved hot reloading) that will ship in 0.5.0. An exported stylesheet will be available to customize the compiled game presentation.

Once 0.5.0 is available, the basic game development loop, from design to publication, will be complete and ready!

In October, I will release additional roadmap info on Elm Story (leading up to 1.0) and Elm Story Cloud (ESC), a service for providing configurable in-app compilation, publication, hosting and community.

To help this project continue to thrive with full-time, active feature development and updates, consider a donation via Itch.io or become a monthly patron. Thank you! :)